Do you really need a new computer? Do you really need a laptop or another hardware upgrade to your desktop? These are questions I've been asking myself lately and a bit later today I'll also ask them when talking to one of my friends (he says he wants a laptop I think he doesn't really need it). The reason that makes me ask them? I love clean places and Earth is getting dirtier with each new computer sold... at least if we're thinking ahead and as long as proper computer disposal methods are not applied once the device gets abandoned by its owner of course. 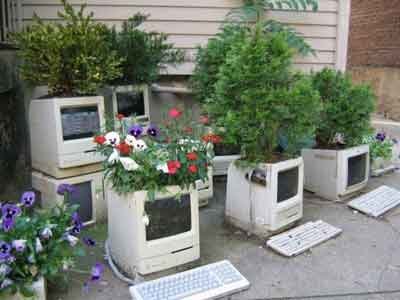 These being said I hope you already ask yourselves about what should be done with old computers to minimize the impact made by their "dead bodies" once the owner decides they are updated (unlike most cars that end up in the junk yards most computers that end up being thrown away are fully functional). Even if it's not your computer the one being disposed of it's always good to have a few solutions at hand so let's see what I have done so far with old computers as well as additional things that can be done shall we?

1. Turn your old computer into a piece of furniture! In my case it was some old desktop case a really sturdy one. Since I sometimes ended up needing a few extra chairs the "desktop computer chair" quickly became my favorite. Even more a friend of mine turned his case into a new house for the hamster adding some tubes wheels and side windows as well as various "feeding facilities." The result? A happy hamster and a unique house for the little rodent! ;)

2. Charity my friends charity! There must be some poor kid in the neighborhood who would really be glad to use the computer you consider to be outdated. If you don't know such a kid maybe the priest from the nearest church does. Speaking about online resources you should try checking out the National Cristina Foundation and see who's in need of used hardware.

3. Start a computer museum!?! If your hardware is really ancient why not start gathering more like it and open some hardware history museum? I would really enjoy visiting such a thing!

4. Turn your old computer into a new one! No I am not talking about hardware upgrades but maybe you need a file server or a Linux box for emergency situations... Speaking for myself I got a pretty old machine (AMD XP 2000+ CPU 256 MB of memory 8 GB HDD etc.) with a pretty fast Linux distro installed that I keep "just in case" (staring at the sun while waiting for some parts to be replaced in my new machine is not something I would enjoy really!).

5. Recycle your computer! If the manufacturer of your new/old machine doesn't have any old hardware recycling program you could also look for some buy-back program. Large retail chains usually offer such a facility. In the worst case scenario take the old one to the nearest recycling center but not without thinking about the previous solutions before that!

6. Have some fun with it! I know it's not really smart but what about smashing a $5000 computer with a sledgehammer? No wait - you can even shoot it or blow it up even run your car over it! No I am not insane... but you should use a computer that was worth that amount at least a decade ago and if none of the ideas above can be applied in your case.

That's it folks! Any other computer disposal methods you want to share with the rest of us? Feel free to speak your mind!