You probably know how to use the ping command when it comes to testing packet loss on a Windows computer connected to the Internet but if you don't then I have some good news for you - you won't ever have to learn how to use it because there's a Web-based tool that gets the same job done... and does it even better! 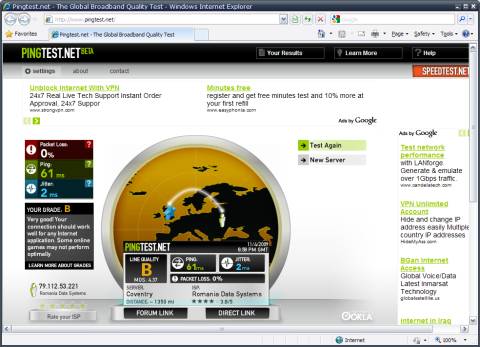 First of all let me tell you what's the catch with the ping command I mentioned above. According to the official mumbo-jumbo from Microsoft.com this command "verifies IP-level connectivity to another TCP/IP computer by sending Internet Control Message Protocol (ICMP) Echo Request messages" so to test your computer's connectivity with the Yahoo servers for example you'll have to type in something like ping -n 250 yahoo.com in a command prompt window and then wait for the command to complete. Now let's leave that sad black and white window aside and move to something more interesting!

The name is PingTest but you can also call it PingTest.net. Even more PingTest.net Beta if you're crazy about names but the tool behind the name is great! OK so what's that special about a site that should determine the quality of your Internet connection? Let's see...

Coming from the same company that's behind SpeedTest.net namely Ookla PingTest looks and works about the same way as that connection speed test only that this time you'll have to choose a server then wait for 250 data packets to be sent received and then watch the results. These results include packet loss (anything above 0% is something to be worried about) ping value (the lower the better since this is the time needed for a packet to go from your computer to the server and back - but don't expect to see ~20 ms ping if you're testing with a server located a few thousand miles away...) jitter (the lower the better - this is the variance in measuring the parameters above in successive tests).

More than the above you'll get a line quality rating and if you get a B rating or worse don't worry - it's all about distance after all since you can't expect for a connection from US to Australia to get the A rating right? Don't get me wrong maybe you have some kind of uber-optical fiber connection to your server but in my case testing with a New Zealand-based server gave me 357 ms ping 1 ms jitter and 0% packet loss so I am not really concerned about that D rating - after all there are over 10k miles to that server... ;)