As most power users who mess with Firefox at least from time to time surely know the path to the ultimate customization options starts with the "about:config" text typed into the address bar followed by a press of that big Enter key right? On the other hand everyone must admit that this entire army of Firefox advanced configuration capabilities don't come easy even to more advanced users since some of those names seem to be really cryptic so a Firefox addon like What's That Preference? is nothing but pure gold! 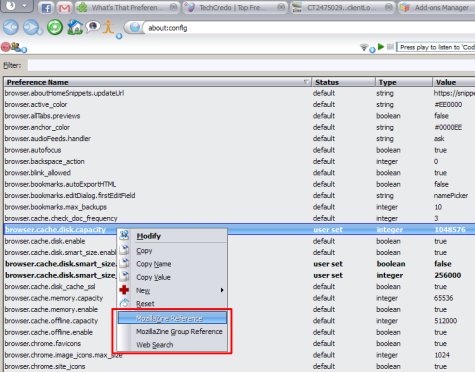 The last update of What's That Preference? arrived on the 5th of May bringing the current version of the plugin up to 0.2 - I know I know... seems like a Beta version of some early pre-pre-pre-prelease plugin but it's not exactly like that. After all all that What's That Preference? does is to add a few new items to the context menu that appears in the about:config section and links to MozillaZine Knowledge Base pages for the selected preferences also providing a Google search option.

Since I jumped to the utility of this Firefox addon but I skipped the remaining part about the numbers around it let's close this article with that part: officially hosted here too What's That Preference? is one of the not-so-many plugins that already work with Firefox 4.0 to 6.0a1 has a rating of 5/5 stars after 6 user reviews and 5523 downloads. I know there must be a lot of power users still using Firefox out there so I expect this tiny number of downloads to increase a lot in the near future not to mention that if you want to help this effort adding information about some options not yet documented properly would be great.

I guess that's all for today so 'till next time it's good bye and... drop a few comments below if you got a few seconds to spare all right? Thank you in advance for that! ;)

Next: Kid Mode - Firefox for Kids