AV Voice Changer Diamond is shareware software that includes more fun while chatting or recording audio voices using microphone. As the name says the application converts a low pitched voice to high and vice versa. In other words a user can convert his male voice to a female voice. This enables novice singers to practice efficiently by including duet affects in the songs. Not only male to female or vice versa conversion can be done using the application but it also includes several other sound effects which can be added to the voices while talking in the microphone to add entertaining effects. Users can also record the converted voices and can even customize the sound effects while recording. 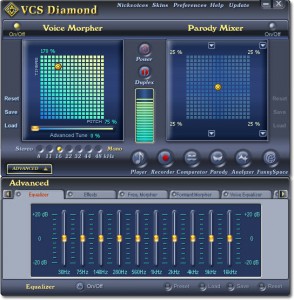