DHCP server plays an important role in both small and large scale industries. In small scale industries DHCP server can be reinstalled several times and this practice would not reflect any negative impact on the network infrastructure as there are very few computers to be taken care of. However in medium to large scale organizations where there are several computers connected to each other and DHCP server is the only source to provide IP addresses to the clients it becomes practically illogical to use it without any backup strategy. In order to protect the loss of configurations and database of DHCP server caused by disaster administrators mostly take the backups. Backups can then be restored in case any disaster occurs. As an administrator of Windows server 2008 if you want to take the backup of the configurations and database of DHCP server you are required to follow the steps given below:

4.Â Â Â Â Â Â  On the opened window right click on the server name and from the appeared menu click on Backup.

5.Â Â Â Â Â Â  On Browse for Folder box browse for and locate for a secured location where you want to keep the backup files of DHCP server and click on Ok button once located. 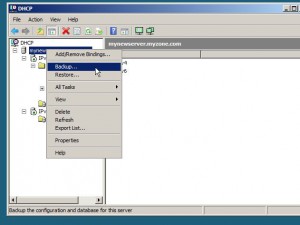 6.Â Â Â Â Â Â  Backup will take place in the background and no message will be displayed on the window. In case you want to check the backup file C:WindowsSystem32dhcpbackup default location can be used to do so.

Note: You can choose Restore in the fourth step in case you want to restore the backed up database of DHCP server.

Next: Configure DHCP for Network Access Protection in windows Server 2008