You know what's the worst part of having to reinstall Windows on some machine? For me the drivers part. As far as I know for most of my friends who have friends asking for such favors the big problem is the same. Reasons? Obviously the original drivers are usually lost or since we're talking about computers that have at least 2-3 years of age newer versions should be installed. Fortunately there are plenty of driver backup programs but only a few of them come for free and without any silly limitations so when I bumped into Double Driver it was clear as daylight that I have to share the great news with you. ;) 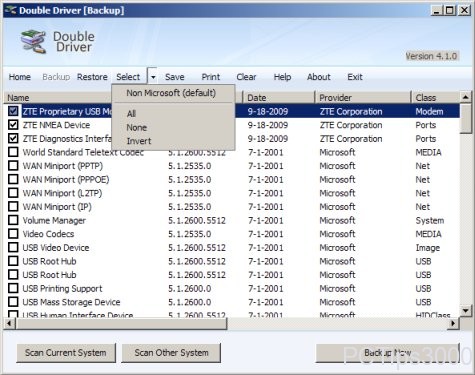 As I write this current version of Double Driver is 4.1.0 released last month. This excellent freebie works with both 32- and 64-bit versions of Microsoft Windows XP Vista and 7 offering the following set of features: list/save/print driver details backup drivers from active and working Windows installs as well as from non-live/non-booting setups backup to folders/zipped folders with self-extracting capabilities both GUI/CLI apps no to mention the most awesome part of it all - Double Driver is a portable application that doesn't need anything special just unpack its folder and run the GUI or CLI app as you wish!

Double Driver comes in a 2.1 MB archive using it is pretty easy it doesn't use a large amount of system resources and if you have to mess with those Windows drivers more than you'd wish this program is one of the best freebies I've even found. Even more I don't think there's anything wrong with it so... go get it while it's still free all right? Once you get your job done properly thanks to it coming back here and sharing with us your experience won't hurt at all either. That's all folks! ;)