Feelin' ready for the Friday cleaning? Sure most people I know usually clean their houses on Saturdays but Friday sounds pretty good to me too. Obviously today we're only going to talk about cleaning your computer's operating system - the shape of your house is your problem and I can't help with that but when it comes to computers... I have a few tools too many to tell you about so deciding to grab Xleaner wasn't exactly one easy choice trust me! ;) 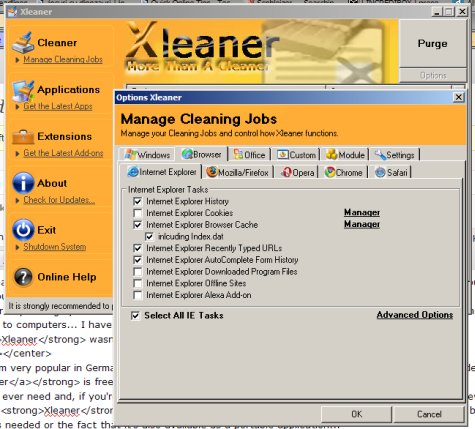 A program very popular in German-speaking countries Xleaner is freely available Windows cleanup utility that can handle more than you will probably ever need and if you're one of those users who can never get enough then I got some good news for you: Xleaner also supports plugins not to mention those language packs that can be added as needed or the fact that it's also available as a portable application... ... but what really matters is that Xleaner comes with an impressive amount of features clearly beating most of its commercial competitors. Sure it may not be as easy to use as some of those but you'll surely be rewarded by the work performed thanks to its powerful tools once you figure out how to harness them. Since this isn't a review I won't get into this program's features at all - the only things you need to remember about Xleaner are these: what we have here is a great program that you really have to try NOW! These being said I hope you'll have a great weekend thanks to your friends and a cleaner Windows thanks to Xleaner and obviously yours truly PCTips3000! ;)

Previous: How to Take Ownership of any File or Folder in Windows 7?

Next: Rapidshare Alternative Of the Week – TyphoonUpload