2.       Click on Start button and from the menu point the mouse to Administrative Tools.

3.       From the appeared submenu click on DNS and from the opened DNS Manager window expand Forward Lookup Zone tree.

4.       After the tree is expanded you will be displayed with the name of the zone that you created and you need to right click on it to get a menu.

6.       In New Host box type the name of the host for which you want to create the record under Name text box and specify the IP address for that host under IP address text box. If you have created Reverse Lookup Zone you can also check Create associated pointer (PTR) record checkbox to create PTR record for the newly created Host (A) record. 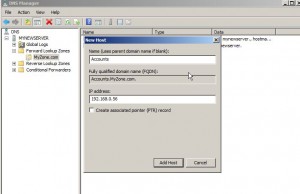