I can't say for sure but I guess there's no secret that virtually every Web browser out there has at least a few hidden options is not a surprise for most of you. Today I decided to tweak my Google Chrome setup a bit and since I know quite a few people crazy about Google Chome experimental features I figured that at least some of you may find this interesting so let's get to it shall we? ;) 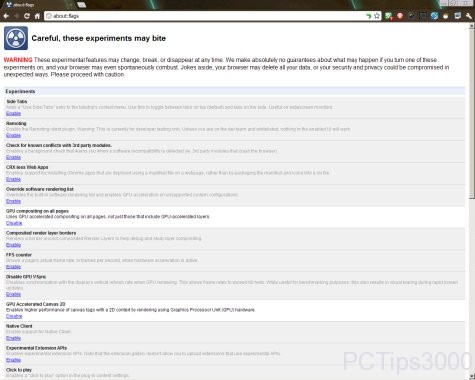 Since there's not much to say about Google Chrome and its main features (the Web is swarming with information regarding this topic) let's get straight to those experimental features!

0. In case the screenshot attached to this article doesn't make it obvious hear this: first of all you have to fire up Google Chrome! Messing with its experimental features doesn't involve any kind of low-level activity - no need to edit your system's Registry or some hidden .INI files. Pheew... :)

1. Type about:flags in the Omnibox and press Enter.

2. Now check the entire list carefully - almost every feature has a decent description added to it. If it doesn't seem clear to you then don't touch it - to be honest I have no idea what's the catch with Native Client for example.

3. Enable or disable features as you see fit. My suggestions go below:

- Side Tabs - pretty cool for people with wide monitors allowing you to gain a bit of that precious vertical screen space. If you're running some 4:3 resolution like me no need to bother with it.

- GPU compositing on all pages - sounds great in theory enabling it didn't start any chain of catastrophic events so I guess you could at least try it. GPU acceleration in a Web browser sounds great but it only kicks in once in a while... at least for now.

- FPS counter - some may say this is a useless option but I think it's not. The reason? The FPS counter only shows when hardware acceleration is active so you can easily tell when your GPU is at work and when not maybe even run some comparative tests between non-accelerated and accelerated page rendering. Anyway most users may not need this enabled.

- GPU Accelerated Canvas 2D - GPU-powered "higher performance of canvas tags with a 2D context" - no need to bother about what's what better to have it enabled. No issues with it so far but no way to tell when it works and when it doesn't either.

This is it people. I know there are much more Google Chrome experimental features to mess with but only the above seem useful to me. On the other hand I am sure some of you may know a few things about the other goodies here so why not drop a comment to share with the rest of us your endless wisdom? Thank you in advance! ;)

P.S. What I have here is Google Chrome 13. If you're going to find this article a few months from now things may be a bit different...

Previous: Clean Your PC with SlimCleaner