I know it's not something I do often but sometimes I really have to write about stuff I can't try. In this case we're talking about a Google Chrome extension that sounds great in theory but unfortunately I can't fully enjoy it due to my location on Earth. How' that? Well Pandora decided that I don't have the right to enjoy its online radio service... so I can only install the Chrome extension and stare at it. Oh I can also tell you about it of course! ;) 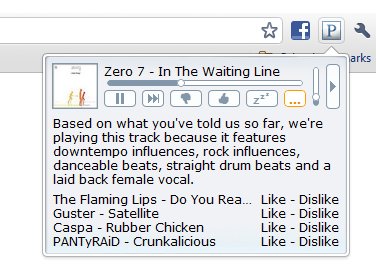 According to the official description of this unofficial Pandora Chrome extension (really funny thing if you think about it a little) now you can ea_sily "play Pandora Radio from Chrome without the nuisance of another open tab"_ but as I was saying earlier you should also live in a country that Pandora loves more than mine... that being the US only at this time hahahaha! :|

Just... see the video above and check the new Omnibox control feature! Other than that I guess it should be obvious that you get the basic controls like Play Pause Skip Like Dislike Tired Station and most important of all this Chrome extension "is not developed associated and/or endorsed by Pandora.com" itself. Oh here's one more thing - while version 1.2.4 released on the 17th of February works with most Google Chrome versions in the wild (I for example have an older Chrome installed 7.0 and I had no problems installing this and starting it... only that I couldn't access Pandora due to its own limitations of course) but Chromium is unsupported because that browser ships without MP3 support. That's all folks!