Microsoft Virtual PC is a freeware application developed by Microsoft. The application can be downloaded from the official website and can be used to virtualize the network setup. Virtual PC helps in reducing hardware costs by creating several virtual machines within one physical machine and allowing administrators to connect them to the entire network infrastructure. Also with the help of Virtual PCs administrators can eliminate the requirement of excessive office space which physical PCs mostly occupy. However it is recommended that virtual PCs should only contain the operating systems and servers which are not expected to face extreme workloads. Examples for these servers may include file servers DHCP servers (for small to medium scale industries only) etc. 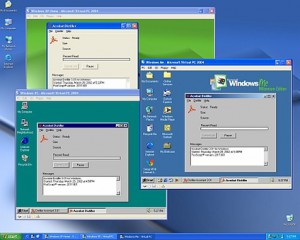