Defraggler a freeware application that can be downloaded from the official website to defragment the hard disks attached to the physical computers. Unlike Windows built-in defragmenter utility which allows users to defragment only the drives Defraggler enables users to specify the target locations even more granularly. This means that with the help of this application users can defragment not only their logical drives but also specific files or folders. The graphical interface of the application is also quite user friendly as it clearly displays the fragmented and/or empty blocks separately. The graphical interface also displays the area which cannot be defragmented while defragmenting disks. 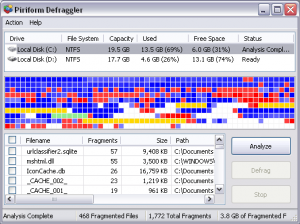