I know a lot of time has passed since I said it for the first time but I must confess this thing once again: I just can't understand why in the world would anyone need to download (most) YouTube videos as long as they're not going anywhere. Sure some uncensored videos that get removed in a matter of minutes after going public or those that become unavailable in a certain country make standalone YouTube downloaders or browser extensions something pretty useful so let's take a closer look at Download Media Bar shall we? (I still can't understand why some of my friends download videos that have been on YouTube or other similar sites for ages but that's a completely different story...) 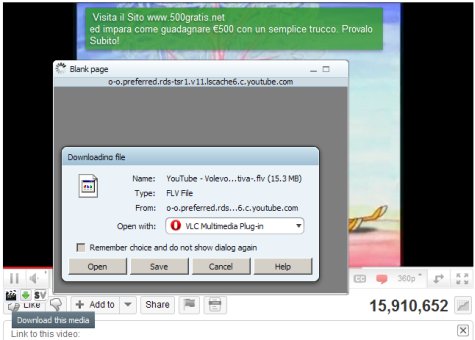 The story around Download Media Bar goes like this: current version is 1.0.2 released on the 28th of April 2011 and having a size of only 18 KB. On the other hand the remaining numbers look pretty impressive - a 4/5 stars rating after 88 user reviews and no less than 250900 downloads. I know we're not talking about millions here but I think we can say that Download Media Bar is a really popular Opera extension without being afraid of telling a lie.

Features? Download Media Bar ads a tiny download panel to the bottom of the Web player window appearing in sites like YouTube MegaVideo Vimeo and so on. That's the good part because the bad part is that sometimes downloading the videos doesn't work - when I tried it with a Vimeo clip I ended up forcing Opera to close. On the other hand I downloaded a few YouTube videos without facing any problems so I guess that most people will find Download Media Bar to be a pretty useful Opera extension despite its issues. Since there are no settings to mess with... you only need to test this piece of code with as many online videos sites and see where it works and where it doesn't. Hey you can even get back here and share your results with us - we would really be grateful for that. That's all folks! ;)

Previous: Use and Mount ISO Images on VMs of VMware Workstation