Firefox 5 just arrived and to be honest I was expecting more. First of all if we look back at all the fuzz around Firefox 4 for quite a long time before its stable public release we can say that Firefox 5 just came out of nowhere. Next it seems Mozilla likes to swim in the same mud as it did back in the early Firefox 4 days - after updating to Firefox 5 I suddenly found myself without over half of the extensions I had installed. Not cool at all but at least Firefox 3.x still gets updated... so a lot of people won't make the big step forward just yet. Anyway no matter if you hate Firefox 4/5 or not let's take a closer look at the new things this 5th major iteration of the fox brings to the table shall we? 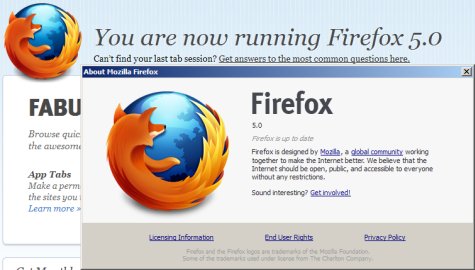 According to some sources launch speed of Firefox 5 is about 20% better than what you'll get with Firefox 4 in similar conditions but to be honest it doesn't feel like that to me. After all Firefox 5 just disabled almost all of my extensions - it's absolutely normal that now it loads faster than before right? Other theoretical improvements should involve memory and networking performance - again I wouldn't bet a leg on that! To give you one quick example my Firefox 5 currently has two pinned tabs (Gmail and Facebook) the Firefox 5 welcome page and one Reddit page using about 240 MB of physical memory and about as much swap space. If this means improvement then I'll go back to that hungry Opera it's still my favorite browser for a lot of reasons! ;)

Other than the above... it seems Firefox 5 doesn't bring anything new and visible to the table. Unfortunately I think this is nothing more but a lame try to force Firefox over the Firefox 4 period. The conclusion? I upgraded I'll stick to it but if you're not moving up because some extension you really need doesn't support Firefox 4 or simply you don't like the new interface stick with Firefox 3 - you've got nothing to lose! Any other thoughts? I'll be waiting for your comments I'm sure I missed something! ;)

Next: Get Off My Lawn