In most cases I hate to see social media widgets on any sites I may be visiting. If I like it I can copy the link and paste it to Reddit Digg Google Buzz like it on Facebook and so on right? To make it even worse some sites simply stuffed some buttons/large widgets in areas where they don't belong making any user's experience worse than before. Fortunately Opera users can avoid some of these social media annoyances thanks to Get Off My Lawn. Pheew! ;) 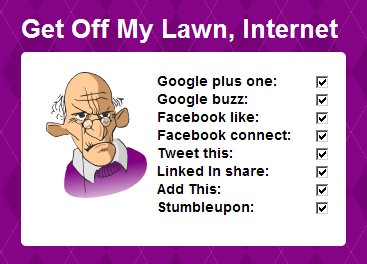 To give you more than just a hint I will continue by adding that Get Off My Lawn has just been released its current version being only labeled 0.3 so you can't ask of it to completely remove any traces of social media from all websites yet but it's already capable of blocking Google/Facebook/StumbleUpon/Twitter widgets as long as they are their official API endpoints.

As I write this the 16.7 KB piece of code known as Get Off My Lawn has been downloaded only 167 times but its rating of 4.5/5 stars achieved after 7 user reviews should make one thing clear - with this Opera extension things look much better than one would expect so if you really want social media to stay out of your lawn... you should definitely give it a try! That's all folks! ;)