I know some people got really pissed off when reading my predictions on Firefox 6 but to make it a bit funny I have to say that it also became obvious that some of them simply didn't get the idea of that article. No worries today we'll make things right - we'll quickly take a look back at Firefox 5's benchmark results and memory usage then I'll upgrade to Firefox 6 and see what happens. Ready or not here we go...

First let's take a look at that good-old Peacekeeper test - I ran it more than just a few times but in real-life conditions. That means I was also running Maxthon with 8 tabs open Pidgin System Explorer and a few other small system tools. At this time my Firefox 5 had a bunch of plugins enabled (their number is probably around 10 nothing out of this world) and 5 tabs open including the Peacekeeper one. I used my old Windows XP computer (see the hardware/software setup right here) only that its CPU and memory frequencies are lower now due to summer-related temperature problems (2.3 GHz CPU now). As you can see in the screenshot below (that result is the best one I got in ~7 runs the low one being somewhere above 2800 points) there's nothing to be amazed of at this time. 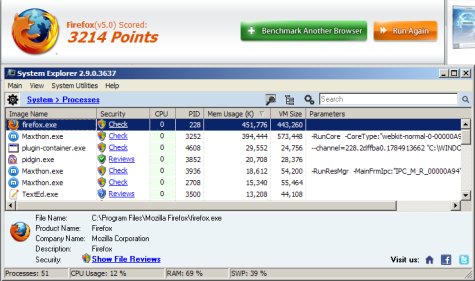 Regarding the memory usage part... you can check the image above once again - I think that almost 500 MB used and just as much swap space used for only a few tabs isn't good at all. Well... update time!

The 6.6 MB update got downloaded really quick so all I needed to do before checking Firefox 6 was to restart the browser and wait for the updating process to complete. Easy to say easy to do... only that my first attempt failed so now I'm downloading the full 16.9 MB update. Well... this time all worked well it seems only that virtually all my extensions seem to be incompatible with this version. Isn't this just great? .. NOT! 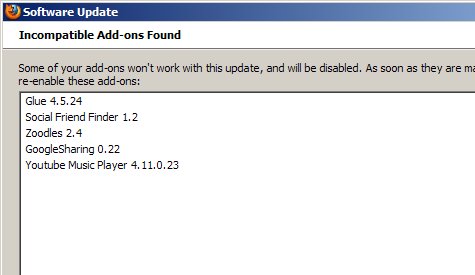 Whatta miracle! I got Firefox 6 up & running and it seems even some of my old extensions still work! Well let's run that Peacekeeper benchmark a few times and see how's the memory consumption part looking too shall we? ;) 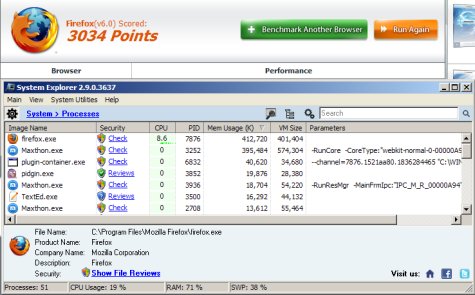 ... but at least it seems that its memory consumption decreased a bit. Just a bit because most plugins are disabled so updating Firefox 5 to Firefox 6 isn't such a big deal. Really!

The last part already? Well I would really like to have more to say about it but I really don't have anything left. The truth is that Firefox 6 is nothing more but a minor update that got a major release label. If you think I'm wrong please prove me wrong - I got nothing against it. We all make mistakes after all - just don't start that fanboy discussion all over again. At this time I think I found two browsers for the Android platform that are better for that platform than any similar programs for desktop computers... but let's keep it in the Firefox 6 area right?

Last words? Firefox 6 is nothing but a minor update as I was saying. Move along now move along! :

Next: Prophet: Outlook Based CRM Software