While most Firefox users I know may not be using too many addons I know one thing for sure: without a single exception they're crazy about Firefox themes! Since I can't say I hate Firefox themes either I decided to start a new series of articles - I may not be able to tell you about a Firefox theme every week but at least I'll try. First stop is a theme I've been using for ages in both Firefox and Thunderbird namely Noia 2.0 (eXtreme). 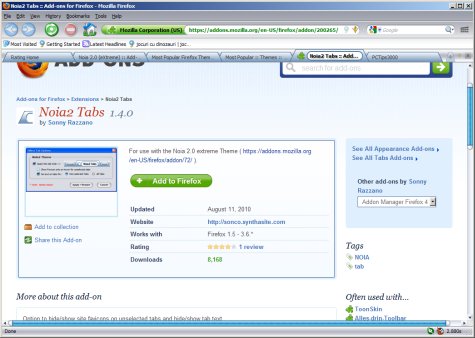 Obviously the fact that Noia 2 seems to be one of the most popular Firefox themes doesn't mean this is a perfect theme that everyone should love. Hey it even has some minor problems here and there but as long as you're happy with it everything should be just fine right? Well more than just Noia 2 for Firefox you should also grab Noia2 Tabs. To be honest I only discovered it today despite the fact it's been around for a while. I installed it and I simply love it!

Seriously... there's nothing special to say about Noia 2.0 (eXtreme) for Firefox but if you really like this Firefox theme you may want to go as far as making your Windows theme match it. If that's true then you should take a look at the Noia Shell32 Pack Ver.2.0. A bit too fancy for me but I'm a sure a lot of Noia 2 fans will enjoy this one a lot. Well... I guess that's all for now folks! ;)