I love freeware and it's not just because it won't cost you any money. It's more about knowing that the programmers behind it put up a nice disclaimer and then work like they would code for themselves while those programming for a price have to keep a lot of things in mind especially fear lawsuits from disappointed users. I know I may be exaggerating a bit but here's a widely used phrase that some take as a joke while I take it seriously: software is like sex - it's better when it's free! ;) 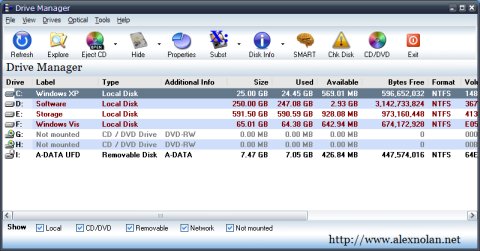 Now slowly moving to the subject I have for you today think about the difference between the various storage devices you own and can be connected to your computer simultaneously as well as the tremendous increase of the "GB per buck" ratio we have seen in the last few years. Impressive isn't it? That's exactly why tools like Drive Manager always come in handy...

So... why should one pick this piece of code and try it? After all time is precious right? Yes that's true but your data is even more precious so checking the SMART status of your drive is something that needs to be done at least from time to time but this is only one of those little things making Drive Manager even more attractive.

One of the other things I like about this program is the fact that you can run it without any problems from any kind of external drive/USB memory stick you can think of even from a non-writable drive making it the ideal choice for troubleshooting computers that don't have Internet access or you can't install software on.

While the basic idea behind it is to show you the drives available on your computer and the amount of free space perform disk checks or explore files on a certain drive Drive Manager also allows you to hide partitions analyze optical discs or... eject the tray of your optical drives (need a free coffee cup holder?) but it doesn't stop here.

Of course that I won't turn this article into a complete spoiler but you also need to hear the dark side of it... Before starting to get along with Drive Manager I had to force its shutdown a few times so be patient while the program scans your drives. Maybe firing it up and going to have a beer in the kitchen is the best thing to do at least as long as you're a Windows user - sorry Linux guys this isn't one of those great multi-platform freebies but maybe next time you'll also get your goodies all right?

Oh yeah one more thing - how come the official page starts with "Drive Manager 4.00: A Useful Utility For People With Lots Of Drive" huh? Well "we rite code we is not speak English" I know but still...

Next: Still Looking For A Free RSS Feed Reader?