I'm still far from embracing Twitter and accepting the fact that this is more than just a useless service that gets way too much attention and is being used by a lot of people who are just killing time despite the fact some of them have really noble intentions. On the other hand I created my Twitter account a long time ago and from time to time I get back to it in most cases simply to try some new Twitter-related tool I discovered. Well today the time has come for Spaz so fasten your seatbelts and get ready for a quick ride! ;) 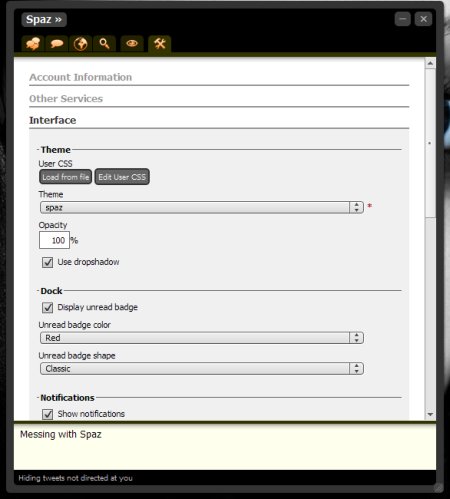 The two uber-awesome points that Spaz scores against anyone's list of features to get from a Twitter client are the fact that what we have here is an open source piece of code that works on all platforms that offer support for Adobe's AIR - Windows OS X and Linux. Written in pure Javascript XHTML and CSS Spaz has no ads and comes with a bunch of goodies built in for example global search URL shortener support for themes user-defined CSS overrides directory listings of people you’re following as well as your followers... even event sounds - not that I consider these sounds to be really useful most of my buddies (myself included) always disable sounds of any messaging client they're using and I don't think it's just us right?

Other than the above I think I should also mention that just as you probably expected Spaz will use some of your computer's memory - much more than it should if you ask me despite the fact I've seen a lot of other piece of code being a few levels above it when it comes to wasting resources... try Yahoo! Messenger for example! ;)

Spaz doesn't make Twitter more useful but it's surely a rather useful tool for Twitter users so if you're one of them I think you should take it for a spin - you can only lose a few minutes of your life nothing more. That's all folks!

Previous: Get Off My Lawn