If you think that Twitter is a big nonsense that shouldn't be even near to the level of notoriety among users and press coverage it gets welcome to the club! Seriously I always thought that Twitter sucks and even worse while I think that some Facebook pages can be pretty useful I also believe that Twitter results should be kept out of the pages I get from Google Search!!! If Google doesn't take care of that... Google DeTwitter may just get the job done! ;) 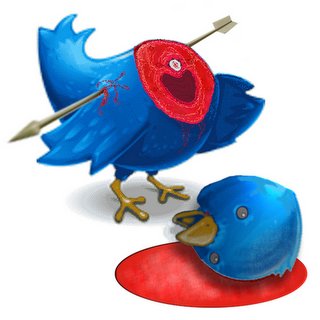 As I write this Google DeTwitter has just hit Mozilla.org so the numbers aren't impressive at all: current version is 1.0 released on the 28thf of March the script works with Firefox 2.0 - 4.0.* has no rating and only 108 downloads so far. But what does it do exactly? The official mumbo-jumbo goes like this: "This script only kills the scrolling section that was recently added to the Google search results page." Obviously this means that you'll still get some results from Twitter after a search but I guess we're on the right path anyway...

... so I guess that's all for this week - just remember that you're not the only one who thinks Twitter is not so awesome all right? To close this article the right way I'll quote a little more from the Mozilla.org page I mentioned above since the sxshaffer the author of this script said exactly what I think:

_"Many people think twitter is an amazing revolution in social networking. Others believe that it's a way for people who can't think in chunks larger than 140 characters to annoy you.

If you have no interest in the random bleats of twits appearing in Google search results this script will kill them."_

Have a great weekend with as little Twittcounters (I just invented a word to stand for "encounters with Twitter") as possible!

Next: Assess Your Network Infrastructure with Wireshark 1.4.4