1.       Logon to Windows server 2008 computer with any account that has administrative privileges.

4.       On Select Features page check Windows PowerShell checkbox from the available list and click on Next button. 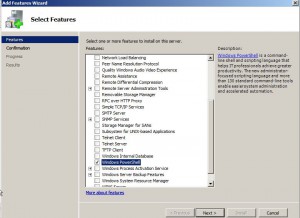 5.       On the next page click on Install button to start the installation process.

Next: Firefox Theme of the Week - Royal Blue