Justin Bieber sucks - we all know it. Do we? After all there are way too many people listening to his crap music so there must be something... or not. Hey I'm a metalhead - don't expect me to ever listen to any of that commercial junk for teenage kids who have no idea what real music is but since I guess there are plenty of these kids using Google Chrome... here's one for you the deaf&blind Justin Bieber fans out there: a Justin Bieber Google Chrome theme! 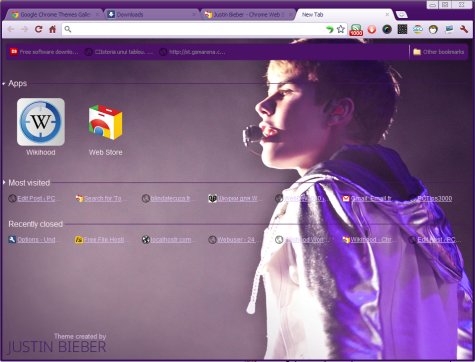 The official description goes like this: "Justin Bieber began his journey as a musician by uploading videos to YouTube. Discovered on the web at age 12 he soon grew into an international popstar with the honor of having the most viewed YouTube video of all time. Justin continues to make the most of the web to build a unique relationship with his fans." I think he also managed to hit a record for most "Down" votes on a YouTube video but I must admit he's a star - after all you don't have to really sing to be a popstar right?

Anyway I hope all the Justin Bieber fans out there will enjoy this Justin Bieber Chrome theme. If you ask me I could say that this theme almost makes me... no comment all right? 45838 users and an average rating of 4.72/5 after no less than 1426 ratings can clearly override any opinion I may have so... That's all folks! ;)

Next: Rapidshare Alternative Of the Week - localhostr