I may be away from home but Microsoft never sleeps and since I bumped into some new Windows 7 updates after powering up my laptop I decided to investigate... and the results may not be encouraging for those who are used to update their operating system blindfolded. Why? Oh well even if you're not using a pirated Windows 7 you should be careful with one of the latest updates labeled as "important" by the Redmond giant namely KB971033. 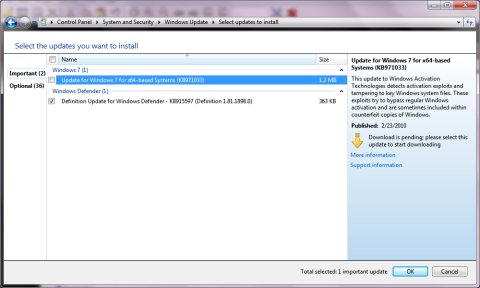 If you avoid reading update descriptions you should read this: _"This update for Windows Activation Technologies helps detect validation errors and activation exploits. This update also detects any tampering attempts made to important Windows 7 system files. Be aware that some counterfeit copies of Windows include malware.

While I have nothing against the validation process itself I am thinking about users who patched their Windows 7 to use custom interface themes. Obviously this update will try to restore those "tampered files" considering that the operating system was hacked. This one doesn't sound well at all so I think I'll pass. After all I know that my Windows 7 is genuine since I didn't pay 5 bucks for it and as long as you have no doubts about the authenticity of your OS I strongly advise you to avoid the KB971033 update. Sure it won't hurt systems using genuine Windows 7 without any special patch like the one I mentioned above but it's not really needed either!

If you have any thoughts regarding this update please go ahead and drop your comments below. Some people are even afraid of being watched by Microsoft and others with the help of this update... and I am sure there are also other stories I didn't hear yet so don't be shy and drop those comments right here will you? ;)