A few days ago I went to my favorite store to get some blank DVDs. So far so good - nothing special you will say. Well those guys who own the store are as crazy about good music as I am and so they also feel the need to keep their old vinyls and audio tapes in digital format. While I usually download good quality CD rips of the albums I already own (is this piracy or not what do you think?) I couldn't find most of my vinyls available. Sure it's not that hard to "grab" vinyls especially since the guys with this store I mentioned recently got a device to rip vinyls to MP3 but what about checking to see if the resulted files are all right? 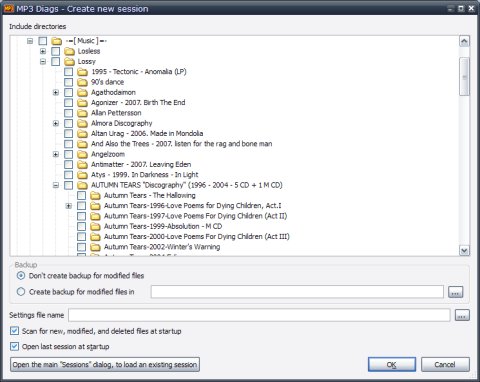 This time we'll talk about a program for everyone since MP3 Diags is available for virtually any operating system you can think of and sources are freely available. Even more the official page I just mentioned above only says Linux Windows and "others" but I am sure this program could also work on Mac OS X and other *nix-based systems. Anyway I think it's enough to know that MP3 Diags works on most Windows- and Linux-powered systems so let's stop talking and unleash its power!

Since I played with MP3 Diags in Windows XP I will talk about my experience with it on this platform of course but I am sure things aren't that different for Linux users. When it comes to installing for example I had to choose between a setup file and downloading two separate archives one with the EXE file and the other with the needed DLL files. I chose the second solution because I always like to create shortcuts myself instead of allowing some setup program to mess with my registry... 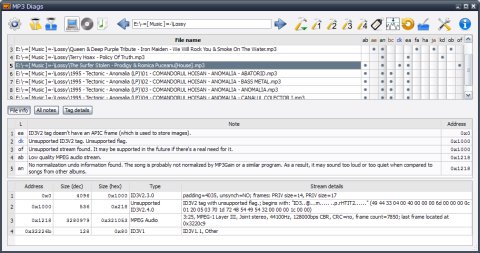 After firing up MP3 Diags for the first time you need to create a new session and I found the interface to be a bit confusing during the first minutes of use but I finally managed to overcome this small problem. Unfortunately while using the program I bumped into a few errors and I am not talking about MP3 file-related ones...

Once you manage to scan your folder(s) with MP3 files you will be taken to a different window where you can see details of each available file and perform a pretty wide range of operations on them like tag editing (the program is capable of scanning online servers to find the proper tags for your files) normalization repair/rebuild of VBR data and many more. 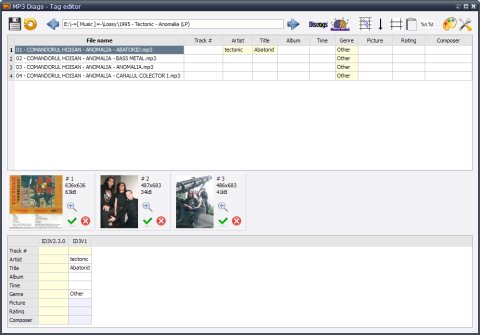 The settings available for you to play with are more than enough especially if we consider the fact that this program is a free one so the only thing that could keep you away from it may be its lack of reliability. Don't get me wrong - MP3 Diags is a program worth trying but it crashed a few times too many on my system so I would really like to hear about your experience with it. After all it could be something wrong on my side that's not something I would take out of the equation.

Well... I guess this is it so let me conclude by asking those two big questions once again:

1. Do you think that if I own a genuine CD/audio tape and I download a RIP of the album I am going into the warez area or not?

2. How was your experience with MP3 Diags? Any crashes encountered?

Thanks in advance! I wish I could award some prize to those who will answer the questions above but the gift box is empty now... just stay close to us and I promise you'll be awarded for it one day! ;)

Previous: Resize Windows As You Wish!

Next: Permanently Delete Files With Ease