If you want to permanently delete files I hope you don't think that Shift-Delete will get the job done because it won't. Directly deleting files without sending them to Recycle Bin is only good for most users but when you have valuable data that you want gone for good then some serious measures need to be taken... and I am talking about destroying that data here literally destroy it nothing less! 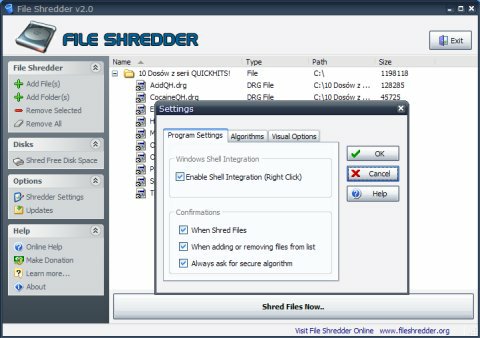 Why would one permanently delete files? Just think what could happen if your personal bank account gets into the wrong hands after you dump your old computer for example not to mention those nasty pics... if you have some of course. Anyway I am sure you got the idea so I am sure that at least giving File Shredder a little try won't hurt. After all we're talking about a completely free piece of code here so it won't cost you a single penny! ;)

Since installing this program is a piece of cake let me tell you what's interesting about it. After all that's why we are here right? First of all we have the file shredder with five methods available: single pass two passes the DoD 5220-22.M method secure 7-passes algorithm (funny fact: it appears written as "Secure earsing algorithm with 7 passes" in the program! ;)) and the last one is the insane Guttman 35-passes method.

As a little side note it would have been really nice to have a custom method available. For example you could destroy all the data on the computer of a chick who dumped you and then fill the hard drive with obscene text patterns... although I wouldn't advise anyone to do that. Nevertheless it's a funny scenario to think about even though some may call me a looney. ;)

More than just shredding files and folders File Shredder is also able to wipe free space on any of your drives. Sure it won't do anything out of ordinary since the methods available are the ones described above and wiping free space is for the paranoid users in most cases.

These being said I conclude my software recommendation with a few things I would like to see implemented in a future File Shredder version: custom wiping settings as I said before and even some scheduling features (for cleaning up temp folders or regularly wiping free space for example) would be nice not to mention support for additional operating systems (currently only Windows supported really sorry for that Mac and Linux people). Anyway let's not forget that we're talking about a free software for those trying to permanently delete files so... maybe one day my dreams about File Shredder will come true but until then I think this program is a fine piece of code the way it is!

Next: Free File Transfer Software Of The Day