We all know Opera was never known for its reliability various modules making it crash more or less often. After all that's probably the first reason that made them take out Opera Unite despite the fact a bunch of users including myself loved it. Anyway we're not using Opera for its reliability but for various other reasons and yesterday after going through a bunch of forum/message board posts I found it really disturbing to see people who used it for almost a decade saying they're going to stop using this awesome but sometimes really buggy Web browser. Well after spending some time to read about other people's bad experiences with Opera 12.13 I finally found a workaround for the main problem so I decided to share that with you as soon as possible - here's how to stop Opera 12.13 from crashing randomly over and over again! 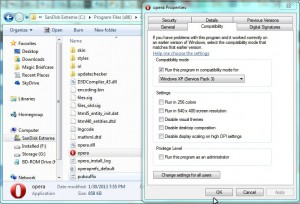 On a Windows machine running Vista/7/8 (the issue may appear on Linux computers and Macs as well but I don't have any around at this time so please drop a comment if you're using Opera on one and get random crashes that would make me go out and find a solution for you as well if there's one available at this time) Opera 12.13 would start crashing randomly without any reason just... crash. This may be not such a big problem at least as long as you'd be able to start it again with all your tabs and extensions even without them BUT Opera won't start again - it will keep crashing over and over and over again!!!

1. Reinstall Opera. This is worst possible solution ever since it may solve the problem for a while as some users report but you'll lose your open tabs and settings. Clearly a bad solution and one to avoid.

2. Just run Opera in compatibility mode with Windows XP SP3 (this worked for me like a charm) - browse to the location where it's installed right click the executable file go to Properties go to the Compatibility tab then do your thing as you can see in the image at the end of the first paragraph - that's all. For now this is the only good workaround for this annoying Opera 12.13 random crash issue. Got another one? Share it with us!