For a lot of people I happen to know a bit better than "Hi what's up?" extensions are more important than the Web browser itself. After all this is one of the main pillars that keep Firefox standing because otherwise it would have been completely wiped out by other browsers a long time ago. Considering this I decided to write an entire episode of Opera's obituary about this topic - Opera's great and way too underrated extensions. 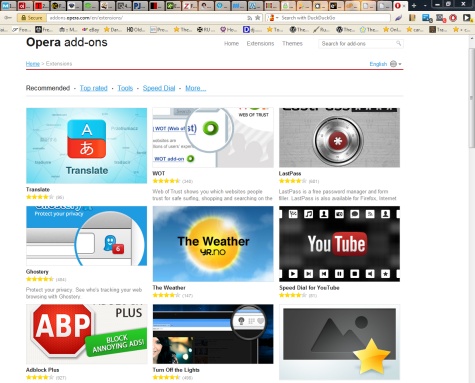 Best Opera Extensions & Then some...Before moving to my personal top of 10 Opera extensions I have to remind you about a stream of articles I published in the past here regarding this topic - they're still available and even a bit outdated as they may be can prove to be quite useful so go ahead and visit the Opera Extensions section as soon as you can spare a few minutes. Now let's see those plugins I can't live without at this time shall we?

1. ExtendTube - as I write this ExtendTube has been downloaded almost 590000 times its rating is 4.5/5 after 654 user votes and best part of it all this awesome extension still rocks as it did the first time I used it. Why should you use it? Just think about having no annoyances in YouTube and even better being able to download videos in a jiffy - and this is only a small part of it all...

2. AdBlock - when it comes to blocking ads this is all that I need but when something's not right there's even Opera's internal ad blocker to help. With a slightly lower user rating on Opera.com there's also Adblock Plus(https://addons.opera.com/en/extensions/details/opera-adblock/?display=en) - feel free to try them both and keep the one that suits you better.

3. Tab Grouper - some may need it some may find it useless. I got it I loved it I kept it. Probably this is one of the reasons for always keeping over 40 tabs open (and driving my wife crazy when she sees "the mess" on my screen ;)).

4. To-Read sites - if you want to read it later just add it to a list accessible via this plugin and keep doing what you're doing without opening another tab. Unfortunately it seems that this Opera extension has some display issues on my computer let's hope it's just something wrong with MY Opera...

5. Next to the above I also use Tab Vault - basically it's about the same thing as To-Read sites but it's better to have 5 or 10 sites added to each than 15 or 20 to a single one. Too bad this one has some display issues on my computer as well. :(

6. WOT - has nothing to do with World of Tanks but with reputation of the websites on the Web. Sure sometimes you may end up avoiding websites that have been flagged as not being trustworthy by mistake or something like that so I am not using WOT on a regular basis but for some categories of users it may be useful especially if they're not using a similar tool that's being offered by some antiviral solutions.

7. The Weather - the name says it all right?

9. Reddit Enhancement Suite - if you're using Reddit then you have to get this! Just get it and you'll see why...

10. Gmelius™ No Ads and Better UI for Gmail - Gmail without those annoying ads? I am sure nobody would refuse such a thing! As usual there's even more than this so go ahead and take it for a spin!

I am sure I missed some awesome Opera extensions so feel free to drop your comments below. Oh yeah in case you were wondering - all the above is not a top I just wrote them down "on the fly" and nothing more. Next week we'll meet again for the final part of this short series so stay tuned! ;)