This week the Torrents and P2P series will take a short break but we'll get back to it next week for sure. Why this break? I just found a piece of code that's even more interesting than "bad" P2P sites and - to be honest until the end - that topic also required a lot of research and I'm not quite ready with that part that's why! After all we're fighting to get original content here this is not just another "let's rewrite that" blog I hope you got that already... ;)

Keeping my information ordered properly is really a big headache to me especially since I currently have at least a dozen of TO DO lists and user+password text files scattered in my work folders and you can imagine how frustrating this can all be from time to time. "I was sure that password was in THIS file. Damn it!" :| 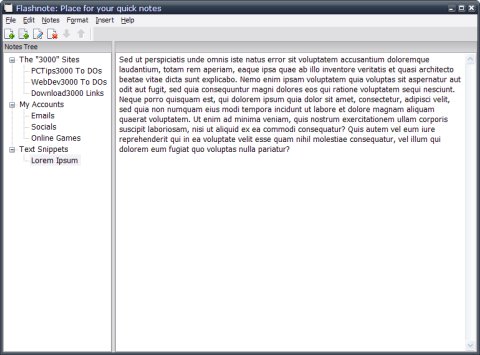 To me Notepad is a no-go and the main reason for that is the fact that I use to edit more files at once and since it doesn't have a tabbed interface... at least a file tree would be nice and Flashnote is exactly the program having it and also the one I've been playing with in the last hour.

First of all Flashnote is a free software that can also help you drop all those post it notes you may have around (I don't know about you but I have plenty of them lying on my desk) and while the official page claims this is not a personal information manager I found it to be a pretty capable one especially since you can save databases with your notes (the .DB format is used) and then restore them as needed.

Working with Flashnote is really easy - you create a first note then a second one then a third one and so on; you can create child notes too and move them up and down the hierarchy as needed. Unfortunately the Search feature only works in the branch currently loaded so if you forgot where you put some precious information... but anyway that shouldn't happen as long as you organize stuff properly.

The big plus of this application is its speed combined with its autosave feature (it saves stuff as you add it) as well as the fact that it stays in the system tray and can be pulled up by using a keyboard shortcut (Alt+S is the default) while its memory footprint is very small (less than 1 MB while minimized and around 4 MB while working with it on my system). According to a user review Flashnote is very fast on slow systems but since my system can't be called "slow" I will have to take that for granted. If there's anyone still using some first-generation Pentium processor here getting some feedback would be awesome! ;)

That's all folks! Flashnote may not be Notepad and it's not a replacement for your daily text editor either but I am sure it can find its place in your computer helping you have an easier life from now on. Finally I must ask you this - if you tried and liked this piece of code what's the use you found for Flashnote?