Can Opera do anything? Well it can't make cookies but I think it could be taught at least to cook pasta! ;) Now seriously - where are all those who were saying that Firefox is better than Opera simply because it has at least 10 plugins available for virtually anything you can think of? Sure at least 8 of those 10 plugins I just mentioned are complete crap in most cases but that's a completely different story so... let's stick to Opera and a little plugin that can take care of a very basic task and nothing more: a countdown! 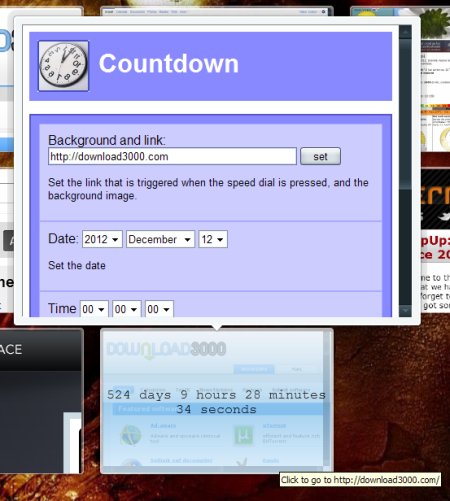 Oh I think I just said "nothing more" right? Well Speed Dial Countdown does a bit more than just showing a counter in your Speed Dial since you can set a website to display and link to inside the widget. Unfortunately this Opera extension offers no alarm capabilities not a single trace of notification when the countdown ends and the website inside the widget is always accessible no matter the countdown status.

On the other hand it seems people like this extension a lot and the drawbacks I mentioned above are considered by everyone to be minor - the numbers surrounding Speed Dial Countdown are really solid: after 2382 downloads and 6 user reviews this piece of code has a 5/5 stars rating! As large as 36.8 KB Speed Dial Countdown is freely available and its last version 1.0.2 was released on the 24th of June. That's all folks - the clock is ticking and I don't want to be late for my lunch so... it's bye-bye for now! ;)

Next: Assign Shortcut Key to Any Application in Windows 7