I never managed to understand Zuma players no matter how hard I tried. I even played that game for an hour or so but still couldn't figure out what's so special about it. Probably that's exactly what most people like about Zuma - its simplicity and if this one won't ever gain a place in my heart Spheres Of Chaos despite its obvious age may just do that... 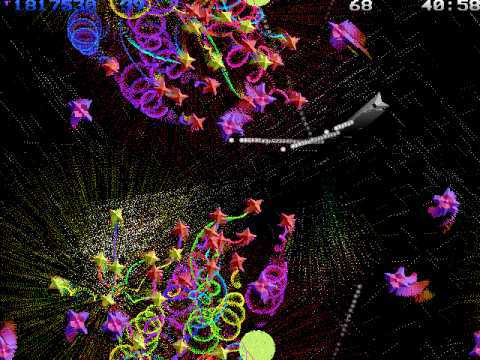 I usually hate quoting stuff but this time I think the official description should say it all since I don't know how else to say "A Pyschedelic (woot! this is how they put it on the official page this is how I put it here...) arcade game" and the screenshot above should also give you a clue. Basically it's like one of those many games that appeared in early 1990s where you were in charge of some kind of spaceship and your task was to shoot incoming asteroids and/or avoid them. Pretty cool huh?

To me for a long time the arcade genre was almost dead but seeing games with ancient graphics and sound like Spheres Of Chaos that still manage to look great over a decade after their release makes me wonder if the gaming industry doesn't need to return to its roots. Anyway leaving these thoughts aside I think that Zuma and Solitaire players should try and taste Spheres Of Chaos - this one leaves any thinking and planning aside and turns it all into a battle for survival!

I know I know if you go ahead and click for a Spheres Of Chaos download this may not improve your productivity at all but weekend is coming and this freeware game works like a charm even on computers built before Windows 95 came along not to mention that there are also versions for Linux PS2 running Linux or even the obscure Risc OS. Sure you may face some problems on modern computers (I think movement was a bit strange on mine for example) but if you really want to enjoy a psychedelic visual feast hang on in there and destroy asteroids for a few minutes... Good luck! ;)