I don't know about you but I never get to organize my time well enough. Sometimes I am simply astonished by how many things can be done in a single day but - unfortunately - I can't keep it up for more than just a few days. Anyway I am sure that I would be a millionaire if I could do that but since I am not a "no man" I am working hard and I will organize better and better with each year that goes by. Regarding the millionaire part that remains to be seen because there are a lot of things I consider to be more important than wealth so let's get back to our most precious asset and talk about a program built to help us see where it disappears: ManicTime. 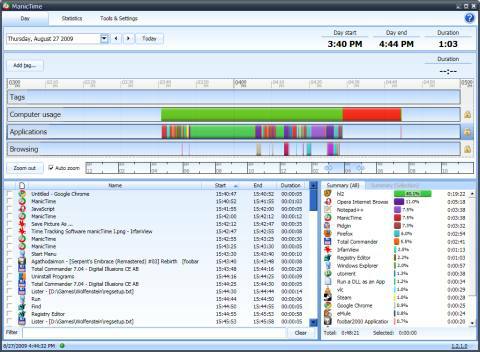 While ManicTime can't bring back the time you are wasting on a daily basis it can surely help you decide what's best for the future. How? It's very easy - this program can track your general computer usage as well as the time spent with certain applications. Obviously various reports can be generated and so on... but it all takes some time to get a better idea of what you're doing right and what you're doing wrong.

ManicTime has a very pleasant interface and I must confess that when I saw it for the first time without even reading the text around it I said: "Finally a new disk defragmenter to play with!" Obviously I was wrong because ManicTime is far from such a program - it main task is to track your computer activities as I said a bit earlier.

Once you download and install the program you can fire it up and forget about that... at least for some time because in the first minutes of usage you'll only be able to explore the interface but you won't see any interesting statistics. The reason should be obvious... but if you really want to hide things from those who may want to take a look at your stats you only need to right click the system tray icon and choose to go off the record. Pretty easy but that's also the main reason I wouldn't use this program to track my employees... 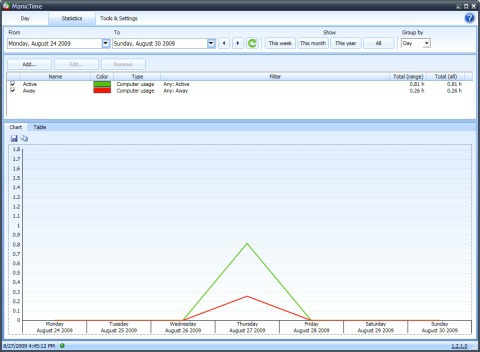 Tagging time can be really useful since the program can't figure out if your Firefox session was wasted time or you were hard at work. How to do it? It's pretty easy but I won't explain it to you. Why? The answer is simple - there are 3 video tutorials about using ManicTime on the official site of the program here. I don't think you should watch them - YOU MUST watch them all right?

Other than allowing the program to track your activity and tagging time you can also get statistics. The chart can be saved as an image(BMP GIF JPEG PNG and TIFF formats supported) while the table containing information about your activity can only be saved as a CSV text file. I don't know about you but seems to be enough for me...

... and this is where we conclude today's meeting but I will surely keep ManicTime around for as long as possible. Finally I found a time tracking tool that won't tell me "Stop wasting time" but make me realize how much time (and money with that) I am throwing off the window! :|