Today I suddenly realized that converting from NTFS to FAT32 isn't as easy as its opposite twin. After trying to convert as I told you some time ago (click here to see how to convert FAT/FAT32 USB drives to NTFS) I decided it's time for some serious weapons so I ended up facing the freely available version of NTFS to FAT32 Converter a piece of code coming from a company called Aomei Technology - never heard of them but it's always great to discover new players in this huge game right? 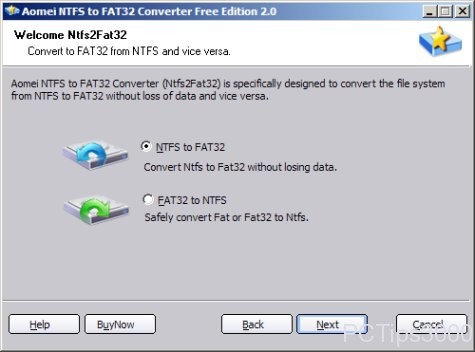 I won't keep you too long today because this isn't actually a software review - all I want to tell you is that I found a way to convert my 8 GB USB drive back to FAT32 without losing a single bit of data and obviously without having to pay a cent! NTFS to FAT32 Converter Free Edition comes inside a setup package that has about 1.5 MB in size its current version is 2.0 and works with Windows 7/2000/XP/Vista/2003/2008 (32 bit and 64bit). Despite its name it can convert partitions from NTFS to FAT32 but it also works the other way around. Awesome!

Unfortunately this free version can only handle partitions up to 8 GB in size - exactly what I needed for my flash drive. In case you were wondering about the reason of this operation let me tell you that some media players can't handle NTFS... and I guess that's all of it. Ta-taa! Now you know how to go back from NTFS to FAT32 without losing data - congratulations! ;)